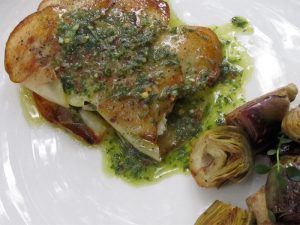 Anne Burrell is brilliant and can break down some difficult looking prep and make it SIMPLE. For instance, making fish scales out of potatoes. Mine didn’t turn out as beautiful as her perfectly potato crusted fish scales… but it was dead simple to do.

Her original recipe called for an infused oil to cook the fish in… but my basil was begging to become pesto and the fresh herbs with the meaty potatoes & fish was a delicious thing to eat.

Word to the wise: If you don’t have a mandolin… don’t even bother with this recipe.

Cook’s Note: In this case it is important to work quickly and to slice the potatoes for 1 halibut fillet at a time. We are NOT going to soak the potatoes in water, this will help them maintain their starch so they will stick to each other and to the fish, but could cause them to turn brown.

Using a mandoline, slice 1 potato extremely thin, (paper thin), in elongated rounds. Lay a piece of parchment paper on a clean, dry work surface. Arrange 3 potato slices in an overlapping vertical line pressing them together as you put them on the parchment. Repeat this process until you have a 4 by 6-inch overlapping potato rectangle that replicates fish scales. Brush the potato “scales” with olive oil and sprinkle with salt. Season the halibut with salt. Lay the halibut fillet closer to 1 end of the potato rectangle than the other and then roll the fish up in the potato slices, using the parchment to help facilitate the rolling. Press to compact and really adhere the potatoes to the fish. Brush the outside of the potatoes with olive oil to seal the potatoes and to prevent the potatoes from turning brown, this will also help make a nice tight “fish package”. Reserve the fish in the refrigerator while preparing the remaining fillets. Refrigerate the fillets for at least 1 hour before cooking.

To cook the fish: Add olive oil to a large nonstick saute pan until the bottom is generously covered and bring the pan to a medium-high heat. Season the fish with salt and add to the pan. Cook the fish on both sides for 3 to 4 minutes frequently spooning the excess oil over the fish to “baste” it. The potatoes should be crispy golden brown and very well flavored and the fish will be succulent inside its crispy “scales”. Transfer to serving plates, top with pesto and serve. 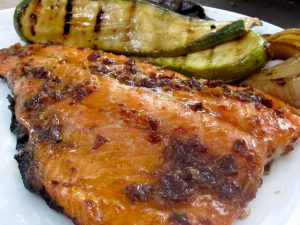 This meal has been in my head since the Maple Chipotle Corn went in my mouth. It was more delicious than I had imagined and is a perfect balance of sweet and spicy that brings a new life to salmon.

I never attempt to flip fish on an outdoor grill… it just never works out for me. So I forget the showpiece grill lines and take the chance my fish will stay in one piece. Simply close the lid and let it cook skin side down and you will have a perfect piece of salmon.

Bring first 5 ingredients to simmer in heavy small saucepan over medium heat. Reduce heat to low and simmer until glaze is reduced to 3/4 cup, stirring occasionally, about 10 minutes. (Glaze can be made 1 day ahead. Cover and refrigerate.)

Season the salmon with salt and pepper. Rub some olive oil on the skin to keep it from sticking.

Preheat grill (I prefer outdoor gas grill) over medium heat. When grill is hot reduce flame to medium-low and place salmon on the grill skin side down. Baste salmon with the glaze several times throughout grilling (closing the lid for 2-3 minute intervals). Do not flip the salmon! It will cook through in 8 -10 minutes, depending on the thickness of the fish.