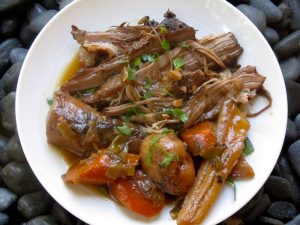 I’ve never cared about having anything but my Dads smoked brisket smothered in his doctored up BBQ sauce. That is until I recently watched Alex Guarnaschelli pull together this roast-like brisket covered in a leek, wine and brown sugary gravy.

Was it as satisfying? Well yes, but in a different way. It’s brisket like no other and if you happen to have a nice piece of brisket in the freezer and no smoker to call your own… this is the recipe you should give a try.

Cooks Notes: I diverted, as I often do, from the original recipe but reducing the brown sugar and adding a few more vegetables (carrots & potatoes).

In a large pot, heat the canola oil over high heat. When the oil begins to smoke slightly, season both sides of the brisket with salt and pepper, to taste. Use metal tongs to add the meat to the pot. If the oil is hot enough, the meat will not stick to the bottom. Cook, undisturbed, on its first side until browned, about 3 to 5 minutes. Turn over and brown on the other side, about 3 to 5 additional minutes. Remove the meat from the pot and put it onto a baking sheet to rest.

Combine the garlic and green onions in a small bowl. Spread half of the mixture over the brisket. Flip the meat and add the remaining mixture to the other side. Set aside.

In the same pot, over low heat and add the parsnips. Season them with a little salt and a 1 tablespoon brown sugar. Stir to coat with the oil and cook until slightly tender, about 2 to 3 minutes. Add in 2 tablespoons apple cider vinegar and the leeks and gently brown them, about 3 to 5 minutes. Adjust the seasonings with salt. Pour in the wine and let it reduce for 5 minutes. Sprinkle the vegetables with the remaining 1 tablespoon of brown sugar and another pinch of salt. Cook them until browned, another 3 to 5 minutes.

Add the brisket to the pot and stir in 2 to 3 cups of the beef stock. Bring the stock to a gentle simmer. Slide it into the center of the oven and cook for 1 hour. Check the level of the liquid, adding water, if needed. Remove the pot from the oven, taste and reseason, if needed. Return the pot to the oven and cook the brisket until the meat is tender when pierced with a fork, an additional 1 to 1 1/2 hours. (Chef’s Note: If the meat looks dry or begins to overly brown, cover the pot with a lid or a layer of aluminum foil for the remainder of the cooking process.)

Remove the pot from the oven and transfer the meat to a platter. Arrange the vegetables alongside and ladle the sauce on top.